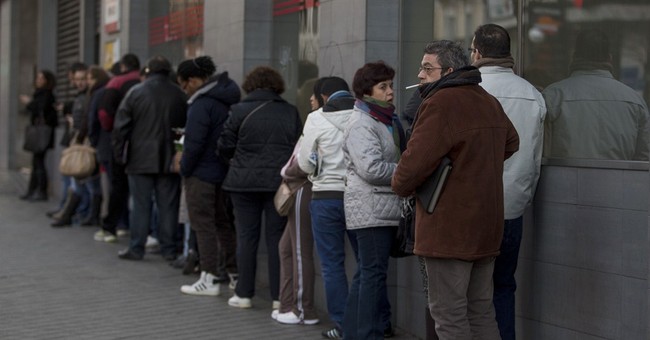 Looking at labor markets, my biggest concern is the drop in labor force participation.

The data from the Labor Department on the employment-population ratio, for instance,

suggest a permanent reduction in the share of the population that is working.

And since economic output and living standards ultimately depend on thequality and quantity of labor and capital that is being productively utilized, it obviously is not good news that millions of people are no longer employed.

But if I had to identify a second-biggest concern, it would be the “Europeanization” of long-run unemployment in the United States. Specifically, we have a growing problem of too many people being unemployed for long periods.

I pontificate about this issue in a column for CNN.

…there are almost 4 million Americans who have been out of work for more than six months. That’s a big number. What’s disconcerting is that the current long-term unemployment is more serious than in previous economic downturns. Data from previous business cycles show people suffering from long-run joblessness at worst accounted for about 20% to 25% of the unemployed. In recent months, that percentage has jumped to nearly 40% — an all-time record! Indeed, America is beginning to look like Europe. It used to be that long-term unemployment in the U.S. was only a fraction of Europe’s, but the latest data from the Organization for Economic Cooperation and Development show that the United States has caught up to many of Europe’s welfare states. That’s not a race we want to be part of, much less win.

Here are some charts that illustrate the severity of the problem.

Let’s start with a look at what’s happened over time in the United States.

As you can see, the problem of long-run unemployment rises and falls with the business cycle. But during previous recessions, the share of the unemployed who were out of work for more than six months rarely climbed above 20 percent. And then the problem quickly got better once the economy began to recover.

That’s no longer the case. Long-term unemployment peaked at more than 40 percent of overall joblessness between 2010 and 2012. And even though we’ve supposedly been in a recovery since the summer of 2009, that number has fallen to only about 37 percent.

Now let’s compare the data from the United States to the numbers from other developed nations. As you can see, the United States used to have a huge advantage over other industrialized countries, but that gap has almost completely disappeared.

We don’t know, to be sure, whether this represents a permanent change. But my concern is that we’re more and more likely to see bad European-type numbers now that we’re enduring European-type economic policies of bigger government and more intervention.

There is an alternative, which I explained in my CNN column, that could improve American labor markets.

…what’s the solution? There’s no silver bullet, but economic growth is the single most important key. …Unfortunately, …we’re still suffering through a sluggish economic cycle. Recent improvements in the overall employment rate are in large part the result of people dropping out of the labor force, and the problem of long-run unemployment has barely budged. To boost employment, we need the kind of strong growth America enjoyed during the Reagan and Clinton years, when millions of new jobs were created and the unemployment rate fell dramatically. To get there, we need a return to the types of free-market policies we got under Reagan and Clinton: a lower burden of government spending and less intervention from Washington.

Seems simple, right? We got good growth and job numbers during the Reagan and Clinton years,

so we should replicate those policies.

But that hasn’t been the case. And the problem didn’t start with Obama, though he’s certainly made it worse.

…we’ve been moving in the exact opposite direction. Under both Presidents Bush and Obama, the size and scope of government has expanded, and the United States — which had the world’s third-most free-market economy when Bill Clinton left office — has now dropped to 17th in the Economic Freedom of the World rankings. We also need to make sure the unemployed don’t get lured into long-term dependency. One glaring example of misguided big-government policy is the argument to endlessly extend unemployment benefits. …Moreover, Obama’s proposed hike in the minimum wage…is the equivalent of sawing off the bottom rungs on the economic ladder. Simply stated, businesses create jobs when they think a new employee will help the bottom line. Artificially raising the cost of workers — particularly those with marginal skills — is a recipe for creating more unemployment.

I hate repeating myself, but it bears saying over and over again that the key to prosperity is small government and free markets.

But to the extent we become more like France and less like Hong Kong, we are doomed to get anemic economic performance and fall in the competitiveness rankings.

P.S. On another topic, it pains me to report that one of the worst examples of DC sleaze is about the become law.

The invaluable Tim Carneydescribes the lobbyist feeding frenzy that produced this monstrosity.

A trillion-dollar, pork-filled farm bill stuffed with corporate welfare passed the House last week and cleared the Senate on Tuesday… The bill perpetuates the federal sugar program. Arguably Washington’s least defensible corporate welfare boondoggle, the sugar program keeps out foreign sugar, hiking prices for consumers, killing jobs for candy makers and enriching a few politically connected sugar producers. The farm bill replaces a flawed program of direct payments to farmers with a potentially more wasteful program of subsidized crop insurance, which takes money from taxpayers and gives it to banks and farming businesses. …The bill had its supporters, of course: the agribusiness lobby, the farm-finance lobby, the White House and the Congressional leadership of both parties. …The Ag lobby got what they wanted. The GOP leadership passed its bill. Democrats got their trillion-dollar price tag.

But here’s the part that really gets me pissed.

Lawmakers also stripped out of the final farm bill a provision that would have required congressmen to disclose the farm subsidies they receive from taxpayers.

This Chip Bok cartoon is a good summary of what happened.

Just in case you need a reminder about why the Department of Agriculture should be abolished.

P.P.S. Since we’re sharing bad news, I’m sure you’ll be delighted to know that the new head of the IRS has decided to reward employees by giving them more of our money. Here are some excerpts from a report in the Washington Times.

Citing the need to boost employee morale, the Internal Revenue Service’s new commissioner said Monday that he will pay out millions of dollars in bonuses to agency employees, reversing a decision his predecessor made to save money… The move didn’t sit well with congressional critics who have been stupefied by the agency’s targeting of tea party groups… “It’s hard to think of a group of people less deserving of bonuses than IRS employees. Frankly, this is outrageous,” said Sen. Orrin G. Hatch of Utah, the ranking Republican on the Senate Finance Committee.

Hey, but nothing to worry about.

After all, the President has appointed one of his big donors to investigate whether anybody at the IRS did anything wrong.

And we already know the results of that investigation. As this Jerry Holbert cartoon notes, the President has told us there isn’t a smidgen of corruption.

Gee, I know I’m satisfied with that assurance. After all, the President would never lie to us, would he?

I guess this is what they mean by trickle-down government.