Everything You Ever Needed to Know about the Left’s View of Income Inequality, Captured in a Single Image

If you want to know why the left is wrong about income inequality, you need to watch this Margaret Thatcher video. In just a few minutes, the “Iron Lady” explains how some – perhaps most – statists would be willing to reduce income for the poor if they could impose even greater damage on the rich.

This picture is another way of getting across the same point. It was sent to me by Richard Rahn (famous for the Rahn Curve), and it uses two pizzas to show how leftist policies would “solve” inequality. 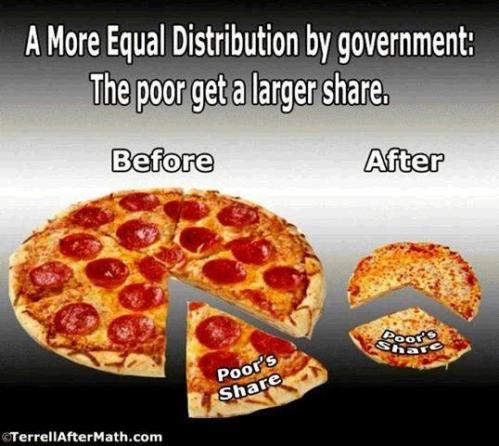 I like this analogy, and not just because I also used the pizza analogy to make the same argument in this TV interview.

The growing or shrinking pizza is useful because it helps to focus people on the importance of growth.

Nations that follow the right policy recipe can enjoy the kind of strong and sustained growth that enables huge increases in prosperity for all income classes. In other words, everyone can have a bigger slice if the pie is growing.

I even tried to educate a PBS audience that growth is better than redistribution if you really want to help the poor. Talk about Daniel in the Lion’s Den! 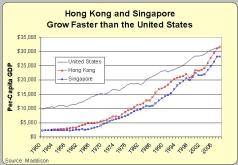 I don’t know if I persuaded anyone, but at least the facts are on my side. Consider, for instance, how the world’s two most laissez-faire jurisdictions – Hong Kong and Singapore – have overtaken the United States over the past 50-plus years.

That’s been great news for low-income and middle-income people, not just the rich.

So ask yourself whether you’d rather be a poor person in one of those jurisdiction or in France. The government in France has all sorts of programs to make your life easier, but you have very little hope of escaping a life of dependency.

And now ask yourself whether it’s good that Obama is doing his best to push America in that direction.

P.S. If you want another example of how long-run growth makes a big difference, check out this chart comparing Chile, Argentina, and Venezuela. Not only has Chile overtaken the other nation thanks to pro-market reforms, but the poverty rate has fallen dramatically.

P.P.S. Since this post shares a very good image about income inequality, let’s include a bonus picture on taxation.

It’s a helpful suggestion on how to make kids aware of the cost of big government.

Though let’s be sure to acknowledge that Obama is doing what he can to make kids more skeptical of class warfare.

P.P.P.S. On a separate topic, I’ve explained that the so-called “austerity” vs “growth” argument is grossly misguided because Keynesian spending isn’t pro-growth and also because it’s important to distinguish between good austerity and bad austerity.

Too many governments are choosing the wrong type of austerity, imposing destructive tax hikes on the private sector. What’s really needed in genuine spending restraint so that “austerity” is imposed on the public sector.

But some folks on the left say there’s been too much spending restraint in recent years.

Viewing the global economy as a single unit, we see a very different picture to the post-crisis world of austerity – at least if “austerity” is taken to mean government spending cuts. The two largest components of global GDP, namely private consumption and fixed investment, both hit multi-year peaks in the first quarter of 2008. …Since the start of 2008, government consumption at the global level has risen by 20% in real terms, whereas private consumption and fixed investment have risen just 8% and 5%, respectively. In other words, despite talk of austerity, government spending continues to run ahead of private-sector spending.

Hmmm…the burden of government has been growing faster than the private sector. That’s the opposite of what the Golden Rule calls for.

And not only has government been growing too fast in the past, it’s likely that fiscal policy will get even worse in the future.

Structurally, government debt, government spending, and the share of government within the economy must be sustainable. Government consumption’s share of global GDP has risen from 11% to 14% over the past 15 years. In 2013, it reached its highest level since 1980. At the same time, government debt-to-GDP ratios have hit record highs in many countries. In the long run, such elevated levels of expenditure (and corresponding levels of debt and deficit) are probably not sustainable, in particular, given other structural changes underway. For instance, demographic trends in many advanced economies pose challenges.

The moral of the story is that America and other nations should be restraining budgets, ideally by enacting the right kind of entitlement reform.

Though I’m worried that Obama is learning the wrong lesson from what’s happening in Europe.

Indeed, this Henry Payne cartoon shows what he has in mind. And if he succeeds, this satirical 2012 campaign slogan may become reality.

P.P.P.P.S. Here’s a final image that captures the essence of Washington.