I have great sympathy for almost all segments of the population that have been disadvantaged by Obamacare.

Among the victims are many relatively powerless people, including children, low-income workers, and retirees.

It’s equally tragic that millions of families – notwithstanding the President’s oft-repeated promise – already have lost their insurance plans, and it’s a crisis that this number could swell to more than 50 million over the next year.

And taxpayers, needless to say, are going toincur heavy burdens because of the President’s reckless new entitlement.

Heck, compared to all these groups, the unfortunate people who merely had toendure the “third world experience” of the Obamacare website should consider themselves lucky.

Yet even though I am brimming with empathy for the victims of Obamacare, there is one group that is suffering and I can say without hesitation or reservation that the people affected don’t tug on my heart strings or engender feelings of sympathy.

I’m referring to the staffers on Capitol Hill. According to a Politico story, some of these folks are having to pay more thanks to the President’s scheme to expand government’s control over the healthcare system. Here are the key excerpts.

Veteran House Democratic aides are sick over the insurance prices they’ll pay under Obamacare, and they’re scrambling to find a cure. “In a shock to the system, the older staff in my office (folks over 59) have now found out their personal health insurance costs (even with the government contribution) have gone up 3-4 times what they were paying before,” Minh Ta, chief of staff to Rep. Gwen Moore (D-Wis.), wrote to fellow Democratic chiefs of staff… In the email, Ta noted that older congressional staffs may leave their jobs because of the change to their health insurance.

Oh no, they might leave? Perish the thought! Surely they have more money to waste, more regulations to impose, and higher taxes to approve.

You may detect a slight tone of sarcasm in my remarks, but that’s for a good reason. First of all, many of these staffers are only in an unpleasant situation because their bosses voted for Obamacare. If they want to complain, perhaps they should schedule a meeting with the power-hungry politicians that caused the mess in the first place.

Second, I have a hard time feeling much empathy for these people when the Obama Administration already has arbitrarily and illegally altered the law so that taxpayers will cover 75 percent of their health insurance expenditures. I realize there’s an entitlement mentality in Washington, but you would think these people would have some sense of shame!

Let’s finish by enjoying some new cartoons. Here’s one from Gary Varvel on the economic burden of Obamacare, which appeals to me for obvious reasons. 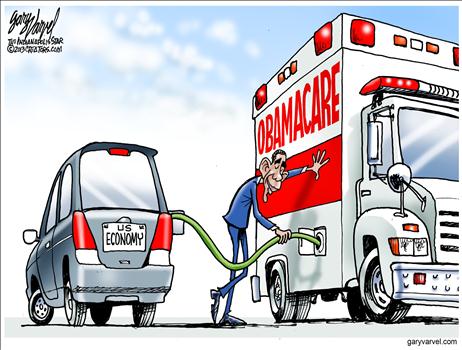 By the way, if you like the Aflac duck and the GEICO gecko, here’s another Varvel cartoon you’ll appreciate.

Now we have a Bob Gorrell cartoon that starkly exposes the President’s illegal changes to Obamacare.

In other words, this bit of satire turned out to be reality.

Nate Beeler has a very good cartoon that captures Obama’s disdain for the suffering of ordinary people.

It fits in well with the Ramirez cartoon in this post.

Then we have Jerry Holbert showing a way to really punish Iran. 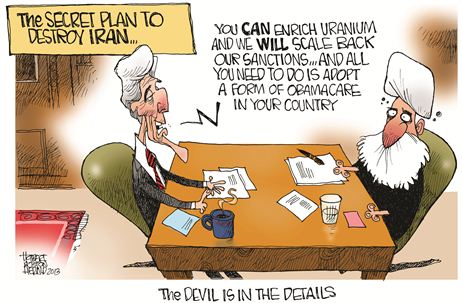 Sort of like what Rand Paul said (quoting me!) about Syria.

Last but not least, here’s another Varvel cartoon that sums up what Obama staffers are trying to do.

Surprisingly, this is only the second time I can recall sharing a cartoon featuring Humpty Dumpty.

But don’t laugh too hard at these cartoons. Obama may get the last laugh if he can survive the short-run political damage and create more long-run government dependency.

P.S. Actually, the title of this post is wrong. There is a group of people in America who don’t like Obamacare and – believe it or not – they are even less deserving of sympathy than the army of staffers on Capitol Hill.

P.P.S. Let’s keep our fingers crossed that politicians don’t deal with this issue by re-hiring the taxpayer-financed “grief counselors” who were used to console Democratic staffers after the 2010 elections.