Remember Julia, the mythical moocher created by the Obama campaign to show the joys of government dependency? As illustrated by this Ramirez cartoon, Julia symbolizes the entitlement mentality.

Unfortunately, there are many real-life Julias.

I wrote a couple of years ago about Olga, a Greek woman who petulantly believed that government was responsible for her empty life.

But we don’t know any details about Olga other than her desire to mooch, so the best real-world examples of Julia may be from England. We have Natalija, a Lithuanian immigrant who has quickly learned bad habits of dependency, and Danny and Gina, two native-born scroungers.

Natalija, Danny, and Gina all decided to get a free ride from taxpayers, largely because overly generous handouts meant that they could enjoy higher living standards by staying at home and watching TV rather than living productive lives.

And if these info-graphics are any indication, there must be lots of people in the United Kingdom who make similar calculations.

No wonder English employers sometime have a hard time filling slots. Why climb the economic ladder when government is providing a comfy hammock?

Unfortunately, the same misguided policies exist in the United States. I shared a remarkable chart last year showing that a household would be better off with $29,000 of income rather than $69,000 of income because of the combined impact of both taxes and redistribution programs.

Now, courtesy of some first-rate journalism by a local television station, we have a powerful example exposing how the system operates. We learn the story of Kristina, who chooses to earn less money in order to keep the taxpayer-funded gravy train rolling.

We’ve all heard the line that America is becoming an entitlement society or welfare state, with half of U.S. households now receiving some type of government benefit. But a CBS 21 News investigation has taken that stat one step further to show you how much people are actually getting for free. A few years ago, reporter Chris Papst worked with a single mom who had two children. She turned down a raise because she said the extra money would decrease her government benefits. It was hard to understand why she did that, until Chris started working on this story. “You do what you have to do as a single mom,” explained Kristina Cogan. “And that’s what I did.” ……she admits living a life off the government can be comfortable. “If you’re going to get something for free, are you going to work for it?” Cogan explained. “It kind of like sucks you in.”

Here are some of the horrific details.

There’s nothing in the story to suggest that Ms. Cogan is utilizing all these programs, but the plethora of available goodies certainly helps to explain why so many people decide it’s easier to be moochers rather than producers. 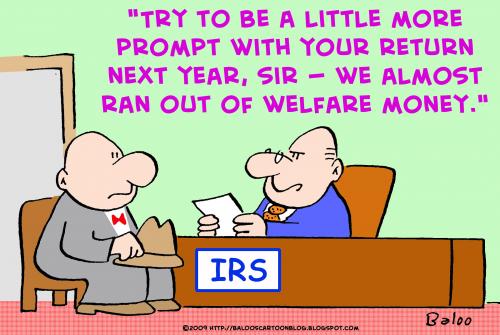 Which also explains why the welfare state is a recipe for ever-increasing dependency, as shown by this famous set of cartoons.

Which also causes a sluggish economy, as illustrated by this Chuck Asay cartoon.

P.S. Most stories about welfare are pathetic, as we see from this dependency contest featuring the “Connecticut Kid” vs the “English Loafer.” But the welfare state also breeds more bizarre behaviors.

P.P.S. Are you subsidizing bad behavior? Click here to see a map revealing which states offer the most extravagant welfare benefits.

P.P.P.S. Share this video to help others understand the high cost of the welfare state.