I’ve been arguing against higher taxes because of my concerns that more revenue will simply lead to a bigger burden of government spending.

Yes, I realize it is theoretically possible that a tax hike could be part of a political deal that produces a good outcome, such as entitlement reform.

But that doesn’t seem to happen in the real world. Indeed, I pointed out almost exactly one year ago that the only budget deal that gave us a surplus was the 1997 pact that cut taxes instead of raising them.

But maybe there’s evidence from other parts of the world showing that tax hikes lead to balanced budgets. Perhaps we can learn something from European nations.

Let’s start with this chart I put together after digging through historical data from the United Nations, European Commission, and Organization for Economic Cooperation and Development. It shows tax burden for the 15 nations of the pre-2004-expansion European Union, minus Luxembourg which didn’t collect this kind of data in the 1960s. Basically, we’re looking at the average tax burden in Western Europe for 1965-1969 and for 2006-2010. 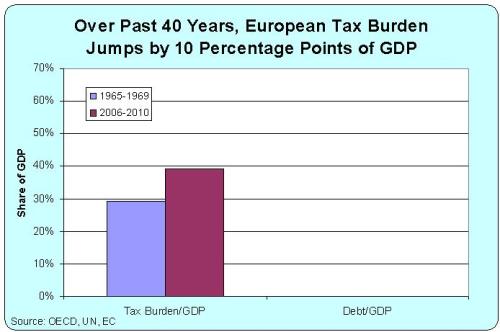 Not surprisingly, it shows that the tax burden has jumped significantly. I suspect the adoption of the value-added tax deserves a good bit of the blame, but that’s  a separate issue.

For this post, we’re wondering whether this big jump in taxes resulted in more red ink or less red ink.

This second chart looks at the burden of government debt, which averaged 45 percent of GDP for the 1965-1969 period. And we see a stick figure wondering whether the debt for 2006-2010 will be higher or lower. In other words, did politicians use the additional revenue to pay down the debt, did they spend it, or did they spend all the added revenue and then borrowed even more? 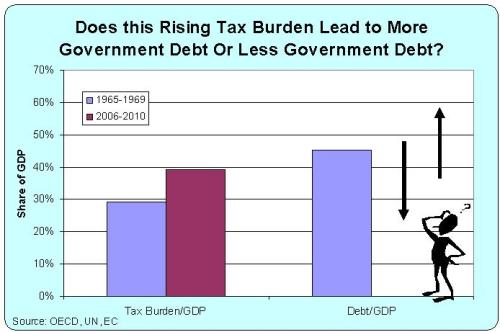 Well, knock me over with a feather. The next chart shows that debt is much higher today, averaging about 60 percent of GDP. 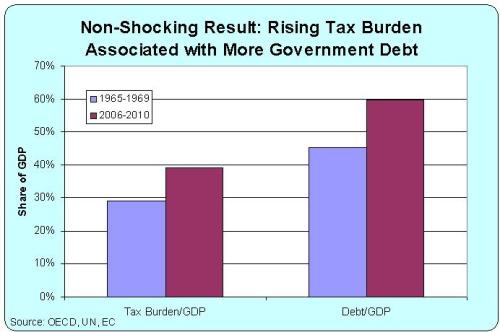 In other words, every penny of new tax revenue got spent. Not only that, but Europe’s politicians accumulated even more red ink because they increased spending even faster than they increased revenue.

What’s the moral of this story? Well, President Obama claims his class-warfare tax policy will reduce deficits as part of a “balanced approach.”

But what he’s actually proposing is that the United States should emulate our friends on the other side of the Atlantic. And it seems their idea of a “balanced approach” simply means higher taxes, as you can see from this shocking chart. Gee, what a coincidence.

P.P.S. The figures in this post are for central government taxes and debt.

P.P.P.S. There are some good lessons to be learned from other nations, as shown in this video. And if you pay attention to the details in that video, you’ll notice that the key to good fiscal policy is…drumroll please…following Mitchell’s Golden Rule.