Capitalism Is A Prosperity Machine 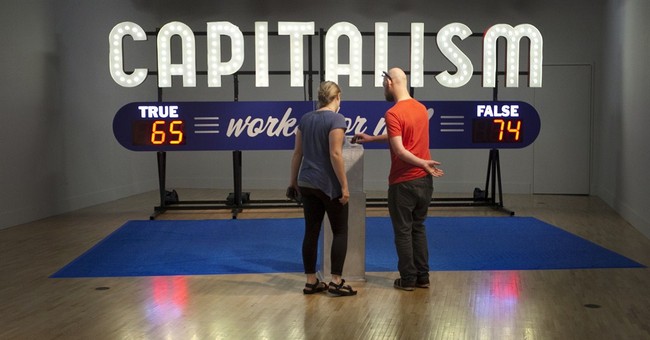 Look around you. Even in the midst of the COVID-19 situation, even with the difficulties caused by the political interruptions in the economy for months, even with the strife and rioting in cities around the country, there is so much good and so much that just works right that we forget about it and take it for granted. Even while many people were out of work for months, there was and is an economic infrastructure that gets food and necessary goods to people every day. It is really quite amazing.

We can think of this as a machine, a prosperity machine that is incredibly complex but, in a way, also pretty simple to understand. The economy is a complex adaptive system that is not directly controllable like a machine, but it behaves in a fairly regular pattern, making it possible to generalize about its attributes.

We can think of that machine as a big black box with a hand crank. Resources of various types are put in one end of the black box, people turn the handle with some type of labor input, and goods and services come out the other end. That is pretty much the general pattern for any kind of productive business anywhere in the world, though the individual processes themselves might be complex and highly regulated by their owners and operators.

Back in the early days of gas combustion engines, a farm tractor had a single piston engine. When it sparked, the piston movement would turn a large, heavy flywheel, the purpose of which was to keep the engine turning while the single piston was recovering for its next explosion of power. Otherwise, there would be no energy for compression. It kept the momentum going.

In our prosperity machine, the flywheel is capital investments. Nowadays, a large engine attached to an excavator can do the work of hundreds of workers in a fraction of the time and energy. Every addition to capital investment adds to the weight of the flywheel and helps to turn the handle so fewer hands are needed for the same output.

The good news is that those people who were put out of work by the machine are now available to do other, more productive work using other machines. A society develops from subsistence agriculture to higher levels of productivity and prosperity by adding to the flywheel. Agriculture in the United States has become so productive that it employs less than two percent of the population, but the ninety eight percent are not unemployed. They have found other productive work using other capital investments, large or small, to fill different, higher needs and wants of more and more people. As the flywheel gets bigger, its momentum can make more people more productive.

We hear a lot of noise about the evils of capitalism, but capitalism is nothing more than using capital to make people more productive. It is the prosperity machine. It is certainly true that there is evil in our country and our world, and some of those evil people even call themselves capitalists. The reality is that, even if they engage in productive business as a capitalist, they also engage in crony politics, using government to limit competition, to subsidize inefficiency, to directly manipulate markets, and so on. Their capitalism exists aside from their cronyism. We would all benefit from more of the former and less of the latter. Their activities act as a brake on the flywheel, reducing the benefits to all. We should all oppose cronyism whenever and wherever it occurs, but we should not mistake it for capitalism. Embracing the prosperity machine is to everyone’s benefit. It helps to weather the economic storms and to improve lives over time.