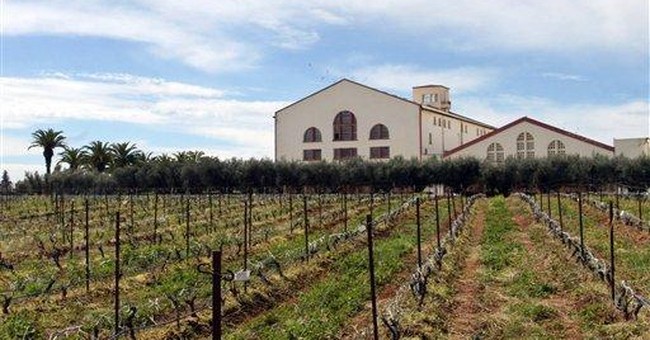 Sadly for many in the wine industry, the worldwide weakness in the economy is having a calamitous impact. Consequently, smart consumers are cashing in. Or should that be caching?

The news this past week was that prices for most expensive, and even moderately priced, red Bordeaux wines from the vaunted 2008 vintage, which aren't even released yet and won't be for at least a year, have dropped.

Because the 2008 wines have been rated as very good, the only reason for the announced lowering of their eventual prices is that few people are buying wine in quite the same way they were a decade ago when the economy was sailing along, fueled by the dot-com boom.

Because the wines won't be on the market for a while, how does this affect buyers? Directly, actually. Since the 2006 and most 2007 red wines from Bordeaux are already on the market, at prices set long ago and for wines that aren't quite as good as the 2008 wines are reputed to be, merchants around the globe are hustling to lower their prices.

The question merchants are asking themselves is: Who will buy a bottle of a 2007 at, say, $30, when the same producer's 2008 will be the same price? The answer they've come up with: no one.

Then there is the conversation I had with a Napa Valley winemaker who makes a cabernet that sells for $90 a bottle. His next vintage is due out in a few weeks, so I asked him what he would charge for it.

At the lower end of the scale, with the Charles Shaw wines that sell at Trader Joe's stores for $1.99 a bottle in most markets, sales are off the chart.

Fred T. Franzia, president of Bronco Wine Co., which makes the Charles Shaw wines, said sales were up in the double digits over last year, when sales were also brisk. He said a rough guess is that sales for 2009 will be "way up."

He added that sales of all of the company's "value brands" had risen 25 percent to 30 percent over 2008. Included in that list are wines under the labels Dona Sol, Estrella and Crane Lake, each of which is made to sell for well under $5 a bottle.

This past week I got together with an old friend, Steve Situm, a partner in a venture that makes some 20,000 cases of California wine that sells for less than $12 a bottle under the Stephen Vincent label. All the wines are excellent values, most selling for $11, and less than $10 in some locations.

"Our sales are up 18.4 percent in the last year," said Situm, "and that's due mainly to the fact that these are great values. I think it's amazing we were up 1,000 cases a month in the first three months of the year, because we took a price increase in March last year, and there was a bit of a sales dip.

"But the brand has legs. And we've done this with smaller wholesalers, not the bigger ones that deal with the broad-market players like Cost Plus and Costco."

Situm said a number of major U.S. wine companies, with wines in the $8 to $15 price points, are off 20 percent to 30 percent in sales in the first three months of the year, "and that's huge."

The best-selling Stephen Vincent wine is called Crimson, a 75 percent syrah, 25 percent cabernet sauvignon blend that "sells off the shelf in Whole Foods. They don't do any promotions. People just love the name."

Consumers seeking values in wines simply have to look aqround.

Wine of the Week: 2007 Stephen Vincent Crimson, California ($11) – Great red and black cherry fruit in the aroma, and traces of handsome cabernet in the aftertaste, plus a bit of black pepper and ripe plums. Excellent balance, and a wine that will be better in about a year.