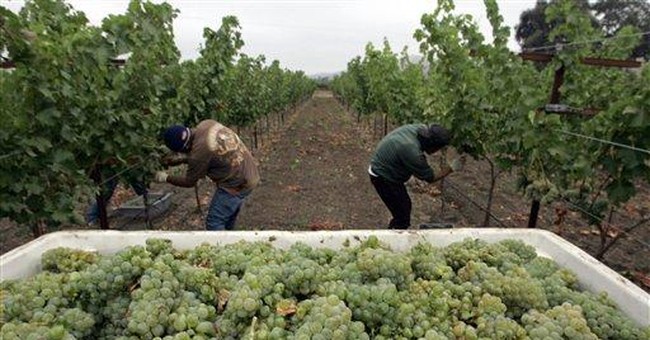 Australian wine, once seen merely as a good quaff for about $10 a bottle or less, is flexing its muscles and offering U.S. wine lovers some vintages that sell for $30, $50 and more.

While the vast majority of Australian wines are still value priced, a lot more of them are being produced by small, high-quality vintners who can charge a bit more for their limited-release gems.

Newcomers to wine might not have heard of names like Brokenwood, Yalumba, Giaconda, or Leeuwin. Therefore, they might know nothing about the 60-plus wine-growing regions in Australia. But the wines are selling.

In particular, Aussie aficionado Chuck Hayward of the Jug Shop in San Francisco stocks literally dozens of obscure but sensational wines from down under. His eager clientele knows to ask for his best Australians because they are usually stocked in the back of the shop.

I suspect Chuck only wants Aussie wine lovers to get these gems, and that putting them out front could mean they might be purchased by people who would fail to understand them!

Recently, I chatted with Rob and Kat McDonald about their newly released 2006 Lilith, a monumental shiraz that sells for $40. The superb wine is from cool-climate Heathcote, and as such isnt for everyone.

Their property produces scant amounts of fruit. And this wine, as distinctive as it is, will be most appealing to fans of deep, dark, age-worthy red wines. But there is only a small amount of it, which accounts for the price.

Most have heard of the largest-selling brand of Australian wine, Yellow Tail. Yellow Tail wines have been tailored to appeal to those who like Australian-style wine: juicy and soft.

But another Aussie brand is starting to make noise in the U.S. market and it has a different image. Once called Angoves, the brand has dropped the apostrophe and S on its new label design. It is from a large producer who focuses not on the vast Southeastern Australia region, but instead uses grapes grown in more prestigious vineyards it owns in various locales.

Tim Boydell, executive director for Angove, said the company has different wines from different regions because the region speaks for the wine. Each wine reflects where it came from.

That means each of the Angove wines displays a regional name on its label, and that each Angove wine offers characteristics that best evoke images of that land.

I most appreciated the 2006 Angove Cabernet Sauvignon from the cool Coonawarra, which at $20 is a bargain. Loaded with cabernet sauvignon and cool-climate, leafy-herbal notes, the wine is stylish and food friendly.

The 2006 Angove Chardonnay ($18) from the Limestone Coast displays delicate citrus character and a lovely crisp finish.

And the winerys brilliant 2008 Sauvignon Blanc ($18) from the Adelaide Hills is exotic and scented like pea shoots with an elegant lime aftertaste.

Our wine of the week, however, is the clear winner. It is made by Angove, but carries another name.

Wine of the Week: 2008 Nine Vines Rose, South Australia ($14): Stylish and dramatic floral aroma of pomegranate and cranberries. Dry and full-flavored, it works with a wide array of foods and shouldnt be missed by lovers of dry, pink wine.

Dr. Fauci Has a Suggestion for Getting Rid of the Coronavirus for Good

Jared and Ivanka Threaten to Sue an Anti-Trump Group. Here's Why.

Dr. Fauci Has a Suggestion for Getting Rid of the Coronavirus for Good