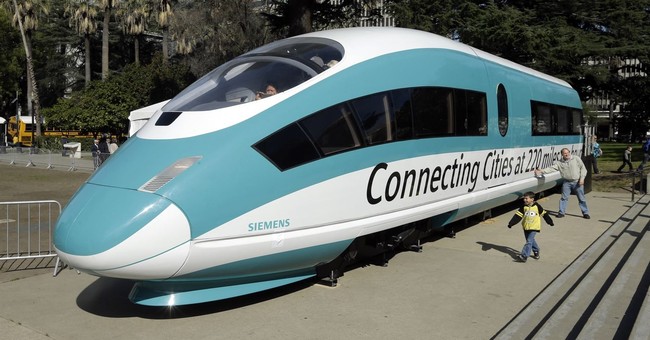 About that $77 billion dollar bullet train from Los Angeles to San Francisco… did anybody do the math?

I get it: politicians aren’t math majors.

So let’s do the math for them.

Along the way, they are battling homeowners, business and farms that they want to level for the project.And then there are the mountains through which they must tunnel.  That alone ads somewhere between $26 billion and $45 billion to the project.Democrats in the state are committed, no matter.  They’ve yet to run out of other people’s money, so the spending continues.

The cost of environmental review alone is over a billion dollars.

Now, to the most interesting numbers.

A round trip flight from Los Angeles to San Francisco is $97.  It takes one hour and 15 minutes.  The bullet train, on the other hand, will take at best 3 hours and 30 minutes.Not exactly the speed of a bullet which, at 2,500 feet per second on average, would get there in about 15 minutes.

Originally, they said the train would travel 220 miles per hour. But that number keeps getting revised downward.

But that’s not the math I’m concerned with.

It’s that $97 dollars per round trip ticket.  First, more numbers.

$77 billion dollars would buy you 793,814,433 round trip tickets, assuming you can’t swing a discount with that kind of volume.  That’s enough for 8,269 years of free flights two and from San Francisco for everybody who makes that journey by plane.  You go back 8,000 years and you pre-date Noah and the ark.  Wooly mammoths roamed the earth just 4,000 years ago.

Heck, lets go crazy and see how long that $77 billion could pay for free flights all around the United States.

But all that $77 billion will do is slowly shuttle people to and from Los Angeles and San Francisco, with some stops along the way. It doesn’t even include some decent clam chowder when you get there.

Oh, but this is about environmentalism, you say?  Do you have any idea how many electric cars you can buy for $77 billion?

Realizing this is a cause greater than a mere trip up and down the west coast, let’s see if there’s a better use for that money.  A liberal one.  Something to get the far-left excited.

There are said to be some 114,000 homeless people in the state of California.  Some of them are families, so you can cluster many together.You could house them all in million dollar homes for that same $77 billion. Just like that, you’d have no homeless.  In fact, all of those homeless would now be net millionaires.

But let’s build a train instead.  A train to do what cars and planes already do.