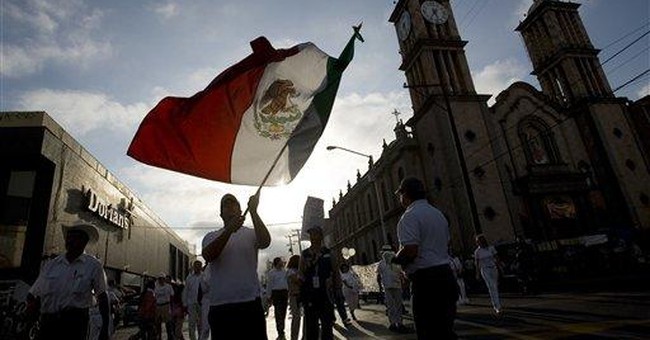 The Fed came to the rescue last week and now another issue gnawing at the market is resolved- at least for the moment.

I am pleased to inform you that The United States of America has reached a signed agreement with Mexico. The Tariffs scheduled to be implemented by the U.S. on Monday, against Mexico, are hereby indefinitely suspended. Mexico, in turn, has agreed to take strong measures to stem the tide of Migration through Mexico, and to our Southern Border. This is being done to greatly reduce, or eliminate, Illegal Immigration coming from Mexico and into the United States. Details of the agreement will be released shortly by the State Department. Thank you!

We have fully signed and documented another very important part of the Immigration and Security deal with Mexico, one that the U.S. has been asking about getting for many years. It will be revealed in the not too distant future and will need a vote by Mexico’s Legislative body!

Over the weekend, the media worked hard to throw cold water on the detail, including tough interviews with Mexico’s ambassador who promoted the fact there would be more purchases of American agricultural and other products.  It’s very clear to me there are several parts to the agreement between the United States and Mexico that neither side would like to discuss until officially signed.

Mexico has been a big winner in the US - China trade war, and according to some sources, it has moved into our top trading partner.  It’s clear they relish that position.   Considering our trade balance is less egregious than with China, it’s a better deal for America as well.

Although it was the weakest sector of the week Communication Services found buyers on Friday and should continue to attract the buy on dips crowd.  Financials were disappointing, and while the knee jerk read would be rate cuts hurt, the sector disappointed during the rate hike cycle.

United Technologies and Raytheon are hooking up in a merger that will create a $121 billion combined company.

The deal should close next year after United Technologies continues efforts to spinoff and sell portions of Otis Elevator and Carrier.  The combined companies will be the second largest defense contractor after Lockheed Martin, so there might be regulatory issues.  This morning CEOs of both companies said they would add 10,000 new employees this year.

California Pastor Temporarily Turns His Chapel Into a Strip Club to Be Deemed 'Essential'
Redstate
Sidney Powell: A “massive” lawsuit is coming in Georgia tomorrow that’ll save Trump’s presidency
Hotair