Countdown To G20: Assessing Where We Stand On Trade 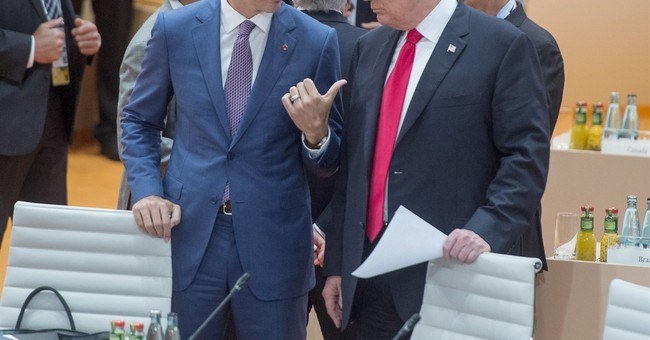 It was a monster session on Wednesday that saw the pendulum of panic swing back to missing out instead of striking out; buyers triggered buyers, and major indices closed at the high of the session.

Familiar names stepped up, but it was a combination of momentum in stocks and beaten-down value names that led the way.

Technology rallied without Apple, and that’s kind of cool. There are so many oversold names in the sector that it’s early to say which moves are trading bounces, and which could be a start of longer-term rebounds.

Consumer Discretionary names were led by Amazon (AMZN) +96.33 or 6.10%, followed by a string of brick-and-mortar specialty retailers.

All eyes were on yesterday’s data on personal income and spending after retail inventories levels increased +0.9%.

This morning, the Street is looking for a greater rate increase on income and personal spending.

If this is going to be a blockbuster year for Christmas spending, it would be good to see signs from today’s economic data. I will be watching to make sure any increase in spending isn’t coming at the expense of lower savings.

We know President Trump’s ire against China began and has been centered around our lopsided trade relationship. Many argue that the trade deficit isn’t a big deal, and in many ways, it is actually good because we are getting cheap stuff. Ultimately, most of the money that leaves our country comes back as investments.

Of course, the millions of jobs, the billions in subsidies, and the labor practices that are the outcome and the backbone of this relationship are often ignored or glossed over. The thing is that right now, it isn’t getting any better.  In September, our total deficit climbed and came in at $54.0 billion.

The good news is U.S. service exports are picking up, reflecting a part of our economic prowess that can’t be replaced with indentured servitude.

However, our trade deficit in goods with China continues to swell, but we are near parity with Canada and improving with Mexico:

I’m not sure if I got into a value trap or not. However, I’m rethinking the big overweight on materials, which are cheap, but haven’t acted great this week. We expect to have alerts on material holdings later today.

At the onset of the Great Recession and financial crisis, the Fed had $800 billion on its balance sheet, when the dust settled it had $4.5 trillion.  Any entity that could create trillions of dollars from thin air, can make and break the economy.  In fact, by its own admission, it’s done both on numerous occasions.

In addition to Wall Street’s affinity to make money in the easiest way possible (low regulations, taxes and interest rates), there are legitimate reasons to breathe a sigh of relief.

The current pipeline of known/unknowns presents a challenge:

President Trump has the tweets, but Wall Street has the ‘sell button,’ and in the end the latter is much more powerful.

Let’s look at recent history.  At their FOMC meeting on December 16, 2015 the Federal Reserve hiked rates for the first time since June 29, 2006.  Now one would think a single rate hike after a decade, that effectively moved rates off zero, would have been no big deal.

The Dow Jones Industrial Average started the session at 17,749, two days later it closed at 17,128 and the bad times were just getting started.  By the time the selling stopped the Dow was at 15,660 and the first 30 trading days of 2016 were the third worst in a century.

It was the ultimate pushback by Wall Street against the Federal Reserve.

At the December 16, 2015 meeting, the so-called dot plot suggested the Fed was going to raise rates to 1.5% by the end of 2016, which suggested several additional rate hikes.

There was only one rate hike in 2016 (in December after the election of President Trump) and the Fed rate finished the year at 0.75%, half the prior projection.  Wall Street pushed back against the Fed (some would say bullied the Fed) again in October, after reckless comments by Jay Powell.

This morning personal income and spending come in significantly better than expected, reflecting the strong and confident consumer.   The great news is, the Goldilocks element of the report shows robust improvements for the consumer and economy, with a benign inflationary impact.

Stock of the Day

Abercrombie and Fitch (ANF) will be the biggest winner in the market at the start of trading.  The company posted resulted that beat the street and offered upbeat guidance.  Key signs for the company and for the US economy.

The market is looking to give up some of yesterday’s gains at the start of trading, but any buy signal could change the direction and continue the panic buying and even opportunistic buying from managers that have woefully underperformed.