Which Stock I'm Holding In My Retirement Portfolio 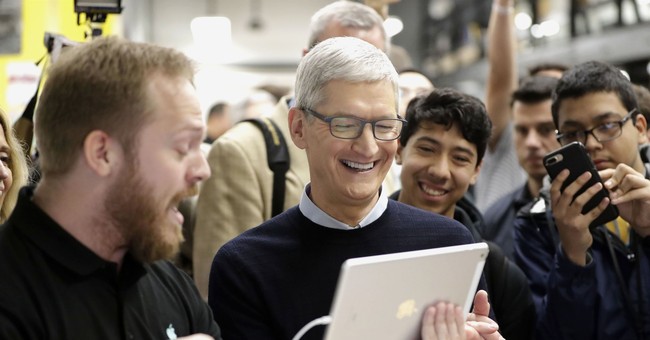 Going into last week, investors were hoping for greater clarity and direction from the wave of corporate earnings results, but we finished the week slightly higher for the major indices, in part because earnings while generally better-than-expected, were a split decision for the Dow Jones Industrial Average.

American Express, General Electric, and United Health rallied on earnings results while IBM, Procter & Gamble, and Johnson & Johnson were taken to the woodshed.

Last week, everyone took a bite out of Apple (AAPL) and yet, even the critics considered the stock a buy.

Apple didn’t report earnings but took a shellacking on growing speculation that this will be a disappointing quarter. Anxiety began on Friday; the bottom fell out when Morgan Stanley analyst Katy Huberty expressed concerns about iPhone sales.

Ironically, she only lowered her share price target on the stock to $200 from $203, and her new earnings estimate is in line with Wall Street’s current consensus. Moreover, she’s calling the stock a buy.

Any long-term holder of the stock has been through these periods of anxiety ahead of earnings releases, especially during the Tim Cook era.  I’m holding the stock in my retirement portfolio.

By the way, there’s a great article in last week’s Barron’s about the Apple/Facebook feud that reminds investors that one company actually makes money the old-fashioned way of selling people products.

I continue to see a lot of opportunity in the sector, and I think several names that have been written off in recent years will be outperformers. Make sure you have exposure to consumer discretionary names where there are pricing power and benefits from a more confident consumer.

On the one hand, consumer staples have no pricing power, and big brands are under assault by new hip brands that are benefiting from strong social acceptance for things such as organic and local.

I continue to like industrial names as well. Thus far, the most impressive earnings result from these names, as transportation from domestic demand and a fueling growth and margin expansion.  Aerospace demand was also a common theme last week, including Textrpm (TXT), Honeywell (HON), and General Electric (GE).

On the other hand, utilities were also strong last week as investors continue to seek a level of safety.

Another thing eating at the market is the Federal Reserve chomping at the bit and ready to derail the economy. That’s the feeling of many folks that believe in-coming NY Fed president John Williams is prepared to sway the body in a much more aggressive plan on fighting inflation both real and imagined.

His comments at the start of last week are still haunting many folks, helping to spark a move in the ten-year bond yield that finished the week up (4.4 basis points to 2.956).

I will be thrilled when the yield hits 3.00%.  It’s silly to think that should be the death knell for stocks.

This week, there are a lot of very important earnings names, but look at some of last week’s oversold names such as Lam Research (LRCX) on the tech side to make major moves higher when they rebound.

The markets have opened slightly higher, but not sure how long it will last.  At 10, we get existing home sales.