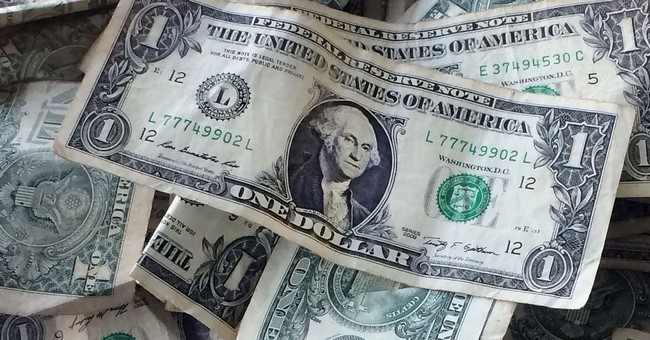 Two presidents came into office with America’s economy in dire straits, and both used a sharp increase in deficit spending to help turn things around.  That’s where the similarities end, however.

Ronald Reagan instituted a sharp tax cut in 1981 that was adjusted in 1982, coupled with other pro-growth policies aimed at stoking that is known as “supply-side economics.”

After slumping in 1982, the Gross Domestic Product (GDP) exploded higher under Reagan, averaging 3.6% over the next four years.  It should be pointed out that a large part of deficit-spending under President Reagan was defense spending in 1983, 1984, and1985, which of course, helped lead to the fall of the USSR. Conversely, Barack Obama maxed out the nation’s credit card, and got massive bailouts, along with the economic stimulus package and unprecedented money-printing at the Federal Reserve.

He also unleashed an avalanche of new rules and regulations that cut off incentive and oxygen to businesses, resulting in the demise of entrepreneurship, while big businesses moved to survival mode- hoarding cash and putting off expansion. Consequentially, after a negative GDP growth in 2009, the next four years saw an average growth of only 2.0%.

The Difference: Remove the Speedbumps

While the tax policy gets the headlines, it’s been the removal of regulations and burdensome rules that have moved the economic needle and have kept the nation poised for growth not seen in more than a decade.  Keep in mind that in 2016, Congress passed 211 laws, while governmental agencies implemented 3,853 rules and regulations.

According to the Federal Reserve, the Velocity of Money can be measured in several ways, including M1 Money Supply:

The velocity of money is the frequency at which one unit of currency is used to purchase domestically- produced goods and services within a given time period. In other words, it is the number of times one dollar is spent to buy goods and services per unit of time. If the velocity of money is increasing, then more transactions are occurring between individuals in an economy.

M1 is the money supply of currency in circulation (notes and coins, traveler’s checks [non-bank issuers], demand deposits, and checkable deposits). A decreasing velocity of M1 might indicate fewer short- term consumption transactions are taking place. We can think of shorter- term transactions as consumption we might make on an everyday basis.

The velocity of money has cratered signaling, a sharp decline in day-to-day consumption.

The question facing President Trump and the Republican Party - can they use debt to help grow the economy out of its rut, and eventually pay down on that same debt in the future?  This is a new approach that is necessary, in part by a feckless Congress that will never make tough spending decisions despite demographic and economic realities that suggest problems are only going to get worse.

There are lots of variables, including the role of the Federal Reserve that complained bitterly about the lack of fiscal policy during its herculean efforts to bring the U.S. economy out of the ditch.  Of course, all the money that had been printed to deal with the Great Recession is one of the reasons why the velocity of money has swooned.

The broader M2 component includes M1 in addition to saving deposits, certificates of deposit (less than $100,000), and money market deposits for individuals. Comparing the velocities of M1 and M2 provides some insight into how quickly the economy is spending and how quickly it is saving.

The addition of trillions of more dollars skews an apples-to-apples comparison.  Still, 4Q17 M2 money supply at 1.43 is not far from the record low read of 1.15 during the Great Depression.

What a rebound for the market. It rallied in an orderly fashion but got an extra boost upon the release of the pro-growth White House budget and a 55-page infrastructure plan.  The big winners included U.S. Steel (X) +5.8% and Caterpillar (CAT) +2.0%.

I should point out market breadth was better when measuring market movers and volume; however, new highs to new lows underscore just how much work there is to get the broader market back in gear.

I’m very impressed with the way the market has rebounded, but key resistance points must be taken out and must happen in the midst of higher rates to dismiss that reason for never owning stocks.

The market is looking lower at the open, but of course, you knew we’d have to deal with downside tests.  This is good actually as rallies must be tested from time to time and the reasons for pullbacks have to be relegated to a category:

The market is working these things out.  Meanwhile, we heard from a key infrastructure player, Martin Marietta, which beat the street and offered upbeat guidance with these comments from the company’s CEO:

"While employment expansion has led to continued strength in private residential and nonresidential construction, we have yet to see meaningful and consistent growth in public heavy construction activity. Infrastructure projects have been hindered by project delays and uncertainty concerning regulatory and other related reform.  We are encouraged, however, by the recent enactment of the Tax Cuts and Jobs Act of 2017 (2017 Tax Act) and its long-term benefits for Martin Marietta, our customers and our industry.  Importantly, passage of this legislation provides positive momentum in Washington, D.C. to address the shortfall in sustainable funding commensurate with the nation's need for infrastructure investment. The recent release of President Trump's Legislative Outline for Rebuilding Infrastructure in America provides additional momentum, increasing the likelihood that both infrastructure funding will be increased and regulatory burdens will be lightened. While state Departments of Transportation (DOTs) and contractors are slowly addressing their labor constraints, we believe that were an enhanced infrastructure bill enacted, those efforts would be more rapidly addressed.  However, even in the absence of such an enhanced infrastructure bill, strong customer confidence and improving sentiment lead us to believe that infrastructure activity for 2018 and beyond should benefit from the Fixing America's Surface Transportation Act (FAST Act), the 2017 Tax Act, and state and local infrastructure initiatives."

Mr. Nye concluded, "Looking ahead to 2018, the fundamental drivers for broad-based construction activity support our optimism that we will continue to benefit from a steady multi-year cyclical recovery across our geographic footprint. Our leading positions in many of the nation's most attractive and vibrant markets should allow us to capitalize on anticipated increased demand for infrastructure projects and private-sector construction activity in 2018 and beyond. With a relentless focus on world-class safety standards, diligent cost discipline, operational excellence and prudent capital allocation, Martin Marietta remains committed to achieving industry-leading results and further enhancing long-term shareholder value."

I still want the Dow to close above 25,200 to become super aggressive, but we are nibbling, so make sure to check with your rep and review the daily Portfolio Approach update at the close of each session.