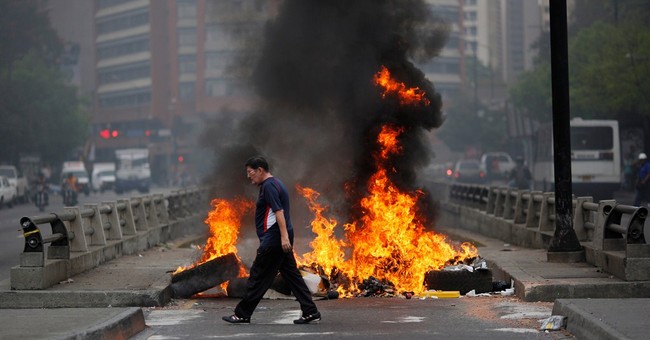 I saw headlines last week that the world was on fire and on the brink of disaster, primarily facing citizens of Syria, Ukraine and Venezuela. The world isn't on the brink of disaster, and in fact most of the world is moving along day-by-day in an attempt to make life better. Actually, the biggest financial news of the week reflected that the world is on the move, and should only become a better, richer, and more peaceful planet (until China can build its navy, but that's an issue for much later). Facebook acquired 'WhatsApp,' a message service company with 55 employees for $19.0 billion, and it's all about reaching 450 million people, and soon-1.0 billion people; mostly outside of the United States.

For centuries, the nations in the headlines these days have shared a history of erratic governance, corruption, and failed economic policies that never allowed them to grow as nations.

Today let's take a look at Venezuela as a failed nation, and as a cautionary tale on the rule and long-lasting destructive legacies of megalomaniacs.

Running Out of Other People's Money and Your Own Oil Supply

"To be Venezuelan today is to live on the edge of the apocalypse, convinced it will happen tomorrow"
-Alberto Barrera

Apologists for the Venezuelans, who emerged under Hugo Chavez, point out that the country has the thinnest income-inequality gap of all of Latin America, which proves the point that such a measurement is misleading when it mostly reflects shared misery. Why would a nation that saw its oil exports surge to $60.0 billion annually (2011) from $14.4 billion (1999) be on the edge of an apocalypse? How could a nation where extreme poverty catered to 8.5% of the population from 23.4% have a murder rate of 13,080 per 100,000 up from 5,968?

It's rather simple. This is a nation that's missed opportunities, and shot itself in the foot guided by a megalomaniac whose tools of intimidation were mixed with gift-giving and demonization. Hugo Chavez hated the west so much that he kicked out companies, and engineers capable of pumping billions more of God's gift to that nation for friends, that included Saddam Hussein, Robert Mugabe, Qaddafi, Assad, Iran, and business partners in Russia and China.

Yes, oil revenues surged, but only half as much as the price of crude oil on the global market. Unemployment declined, but mostly in the evolution of a crony system that doubled public workers to 2.4 million people, and established an investment arm, 'Fonden,' that's squandered billions trying to pick winners and losers in business. All the while, the main engine of money - the national oil company - pumped out 2.9 million barrels a day, down from 3.2 million in 2005, as productivity spiraled to its lowest point since 1940.

Hugo Chavez stayed in power until his death by taking a page or two out of the playbook of many famous leaders throughout history. In fact, many would say his story of power seems eerily similar to American audiences. He was flamboyant and charismatic, but that's not enough to feed people, so he had to be and do more. His hatred for the west meant his economy would have to be engineered and controlled.

"The devil came here yesterday and it smells of sulfur still today, this table that I am now standing in front of." - Hugo Chavez at UN 2006

Power grab and abuse of power:

Farm takeovers and media takeovers made a mockery of the two-party political system. When Chavez lost a referendum on a constitutional change that would have made the Bolivian Revolution irreversible, the de-facto dictator instead used presidential decrees. Later he would publish names of the millions that went against his will, which caused them to be ostracized, lost their jobs, and suffered enormous personal challenges.

So, now Venezuela lives on the edge, and as the money runs out the ability to bride, buy, or intimidate the forces of real democratic reform is waning. What happens when you run out of other people's money, borrow to your limit, and can no longer afford to keep lavish promises in return for political gain?

You run out of milk, cooking oil, and toilet paper.

We can only hope the people of Venezuela seize the opportunity to remake their nation into a democracy that sees individuals strive for success, rather than handouts and subsidized gasoline. Where news is fair and balanced; where dreams are unlimited and independent thought is encouraged and applauded. In many ways, I could say the same for the United States while we're on this topic.