Can A Gay, Christian, White Man Take The Nomination That Biden Is Losing? 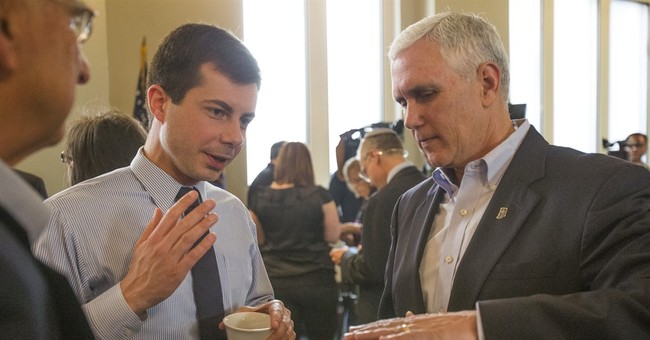 Since I last discussed prediction markets and the state of US politics, much has changed. Mueller’s report came out, Biden has dropped precipitously, and the UK government has fallen into a state of unpredictable chaos over Brexit.

We’ll look first at Mueller’s report. As you might guess, it had a positive impact on Trump’s chances of being impeached. In the past month, the chances of Trump being impeached in his first term have dropped from 42% to 17%. This story is already old news - the MSM being more than happy to drop a story about media accountability – but the fact is that Trump is less than half as likely to be impeached as he was a month ago. And if there’s only a 17% chance of him being impeached by the Democrat-controlled House, think of how much lower the probability of him being convicted in the Senate is. It looks likely that we will be dealing with Trump as President, with all the good and bad that entails, until at least January 2021.

Speaking of the next election, Biden now longer has front-runner status. The accusation of inappropriate interactions with two women have slowed if not outright stopped the momentum of his campaign in waiting. According to the prediction markets, Biden now has a 17% probability of becoming the Democratic nominee. A couple weeks ago, he was above Bernie, at 26%.

Of course, if Biden decides to run, there will be more accusations, and those accusations will run on cable TV and on Facebook and Twitter, in tandem with the images of Biden creepily whispering into the ears of women and girls. That’s not to say he wouldn’t win, but he would emerge from that process heavily damaged and with a substantial portion of the public, both on the left and the right, regarding him as a serial sexual abuser. Right now, Biden has an elder-statesmen-but-funny public image, and he might not want to sacrifice that. In any case, we should know his plans by the end of the month.

An interesting development is the rise of Pete Buttigieg from obscure long-shot to genuine contender. Buttigieg is gay, a devout Christian, a military vet, charismatic, and able to appeal to more moderate voters. He also has a hard to pronounce name that nobody recognizes, and white skin. Currently, he’s tied with Biden at 17% on Predictit – which, frankly, says more about Biden than it does Buttigieg. My current feeling on Buttigieg is he would be a great general election candidate who would probably beat Trump, but that his chances of breaking out of the Democratic field are a little overstated right now.

Finally, we have Brexit, a situation somehow even more chaotic than the Democratic primary. I am acutely aware of the ill-advised nature of writing about prediction markets for an unpredictable situation, but this a chronically under-reported story in the US. Case in point: the PredictIt markets for Brexit-related issues are extremely narrow, dealing entirely with the timing of the split, not it’s nature. Over on Oddschecker, a UK-based conglomerate of the major political betting markets, we have a much more thorough overview of the situation.

Still, bettors think it’s highly improbable that Article 50, which officially began the process of leaving the EU, will be revoked. My personal opinion is that we will likely continue to see “indicative votes,” votes of no-confidence, resignations, outrage, and the like, until someone finally comes up with a deal that is not-horrible enough to barely get the majority it needs to pass. They probably won’t get full control of their borders, which will disappoint many in the Conservative party and might lead to a UKIP resurgence. However, Tory leaders might take more a hardline if there were some major Muslim terrorist attack during the negotiation process.

So, in short, Trump probably won’t be impeached, Biden isn’t who he used to be, Buttigieg is a more serious candidate than anyone thought a month ago, and nobody knows what’s going to happen with Brexit.

Texas Democrats Finally Begin to Realize They Are Screwed
Redstate
Maher: Maybe the "woke Olympics" shouldn't have taken its cues from the Oscars
Hotair