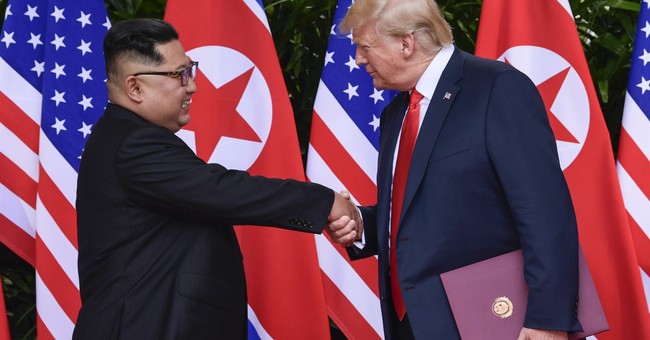 The mainstream media says that the Trump/Kim summit was a failure and didn’t achieve anything of value, but investors say the opposite. Remember, the entire purpose of the news media and pundits is to keep you watching their network. They are directly incentivized to exaggerate bad things and downplay good things, because people watch a lot more news when things are bad than when things are good.

But investors who are trading stocks and currencies based on political events -- the people who have skin in the game -- don’t agree with the pundits. They make their living on good investments, not on getting attention. And investors who are taking actual risks and betting actual money are indicating that the Korea summit turned out well. First, we’ll look at currencies. Over the past 5 trading days, the Korean Won has strengthened in comparison to most other major emerging market currencies. There are some exceptions of course: the Turkish Lira and Mexican Peso have both had an incredible run these past few days. Ignoring those outliers, the Won and Yen are doing quite well.

The Korean Won and the Japanese Yen, representing the two countries most directly threatened by North Korea, have been gaining against most other EM currencies during the past trading week.

Now let’s look at stocks. The Korean KOSPI also outperformed other emerging markets after the summit with Kim.

*In blue is the Korean KOSPI, and in red is EEM, an index of emerging markets (Chart courtesy of TradingView)

Now, there’s some noise in the signal here; that large drop you see at the beginning of June 14th was in response to the Federal Reserve’s decision to raise interest rates. But prior to that, in the immediate aftermath of the summit, the KOSPI was easily outperforming EM generally.

Share this on Facebook
Tweet
DeSantis Blasts Biden: 'Why Don’t You Do Your Job?'
Katie Pavlich|
To No One's Surprise, COVID Has Returned to Wuhan...And It's Not the First Time
Matt Vespa|
Psaki Again Blames Republicans for Crime Wave While Defending ATF Nominee Chipman
Spencer Brown|
This Swing District Democrat Has an Uncomfortable Connection to Group Promoting Critical Race Theory
Rebecca Downs|
Clown Town: COVID Experts Get Buckshot to the Face Over Latest Advice About Wearing Masks at Home
Matt Vespa|
Only a Handful of Dem Governors Have Called on Andrew Cuomo to Resign
Madeline Leesman|