One of the most important identifiers of a country’s economic health is its current account balance as a percent gross domestic product (GDP).

According to data from a great source, Trading Economics, “The current account balance as a percent of GDP provides an indication on the level of international competitiveness of a country.”

Usually, countries that record a strong current account surplus have an economy that is heavily dependent on revenues from exports, with high savings ratings and weak domestic demand.

“On the other hand, countries recording a current account deficit have strong imports, a low saving rates and high personal consumption rates as a percentage of disposable incomes,” according to Trading Economics.

During the past two years of the trade war, China’s economic momentum was slowing at a precipitous rate. However, the fact that the U.S. economy, led by a robust labor market and strong consumer spending on housing, durable goods, services, travel and entertainment suggests that the U.S. and Chinese economies are not as correlated as many economists have claimed.

By both definition and economic rationale, something has to give.

While it is evident that the U.S. economy stands to risk slipping below 2.0% GDP growth in 2021 and 2022, a lot can happen between now and then. For instance, a crucial and way overdue U.S. spending bill of around $1 trillion for infrastructure would increase GDP figures higher for the next two years, if and when that legislation were to come to pass. 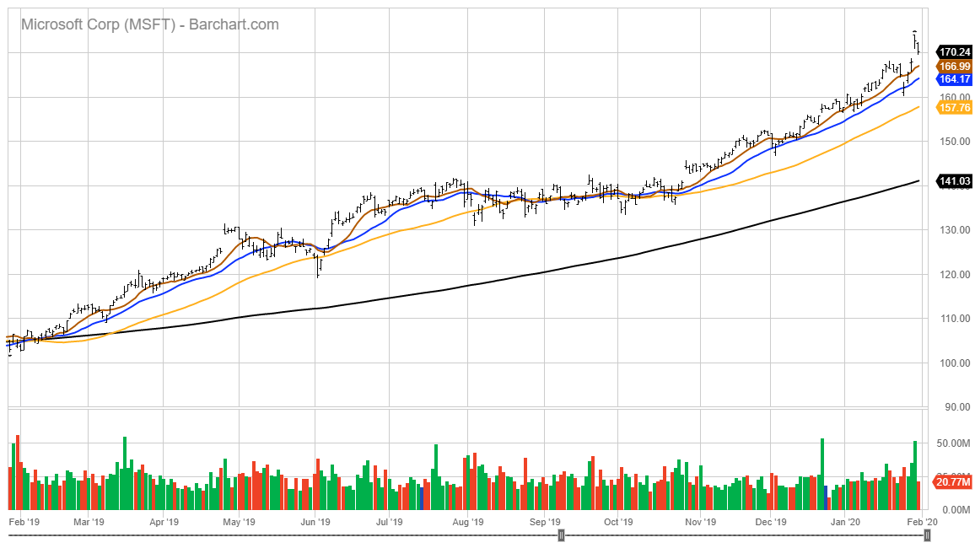 This past week, State Street Global Advisors forecast China’s 2020 GDP as falling below 6% for the first time since 1990 as the tariffs that are currently in place and reductions in infrastructure spending have impacted growth.

The Phase One deal with China is set to be signed on Jan. 15. Although the deal represents little progress in the key areas of U.S. interest, such as accountability for cyber espionage and forced technology transfer, markets warmed to the breaking of the months-long political gridlock.

It is understood that Phase 2 will focus more on these matters and will not just be a deal where China will buy more farm, energy and manufactured goods and the United States will reduce some tariffs on Chinese imports. While both sides have stated that they will address some disputes over intellectual property rights, this area has no terms set forth and thus is just a talking point.

Specifically, as outlined in a detailed Reuters article, the U.S. suspended a 15% increase in tariffs that were scheduled to go into effect on Dec. 15 for nearly $160 billion worth of Chinese goods, including cell phones, laptop computers, toys and clothing. China canceled the retaliatory tariffs that were due to take effect that same day, including a 25% tariff on U.S.-made autos.

The U.S. Trade Representative’s office said it would cut by half the tariff rate it imposed on Sept. 1 on a $120 billion list of Chinese goods, to 7.5%. U.S. tariffs of 25% on $250 billion worth of Chinese goods will remain unchanged, providing U.S. negotiating leverage for a second phase of negotiations next year, according to the U.S. Trade Representative’s office.

China has agreed to increase the purchase of American products and services by $200 million over the next two years. This would almost double the amount of exports to China. On the surface, the deal looks constructive, but neither side has released any details of the agreement yet. Chinese officials are describing the deal in guarded terms and not publicly confirming much of Washington’s version of the agreement — especially with regards to goods purchase commitments.

China’s domestic economy is under pressure from several fronts. Lower investment in the sluggish housing market is putting downward pressure on the economy. That slow decline will fester in 2020 as the government maintains tight control over property speculation and restricts the ability of property developers to raise capital for speculative building.

Infrastructure spending, a key player in China’s torrid growth from 1990 through 2012 also has slowed, forcing local governments in 2019 to speed up the issuance of special purpose bonds that targeted public works projects. Infrastructure spending for the first 10 months of 2019 rose by only 4.2%. (Source: caixinglobal.com)

Producers and supply chains are moving out of China. Tariffs and ongoing uncertainty are driving companies to relocate production out of China to neighboring countries like Taiwan, India, Vietnam, Malaysia, the Philippines and Indonesia. According to The Wall Street Journal, Apple is considering moving 15%-30% of its manufacturing to India and Dell may move its personal computer production to Taiwan.

As the CEO of Stamford, Connecticut, furniture maker Lovesac Co. stated, “Once you move, you don’t go back.” He has cut the level of his company’s production in China from 75% at the beginning of 2019 to where his company will have no production in China by the end of 2020. Cummins is moving the operations of its diesel engine production to India and other countries.

According to the Nov. 29 Caixain report, (“China’s Economy Set for More Pain in 2020 as growth Forecasts Sink Further”), the moves by U.S. companies add up to a reordering of global manufacturing supply chains as they have begun to prepare for an extended period of uneven trade relations.

Executives at companies that are moving operations outside China have said that they expect to keep them that way because of the time and money they have invested in setting up new facilities and shifting shipping arrangements. Companies said the shifts accelerated after the tariff on many Chinese imports rose to 25% from 10% in May.

President Xi Jinping and China’s senior Communist Party officials love to be masters of the long-range game by exercising patience and waiting out the presidents and administrations that they see as troublesome. But the Chinese economy has some serious structural problems. To top it off, China’s total debt — corporate, household and governmental — rose to over 300% of GDP in the first quarter of 2019. This figure is slightly up from the same period a year earlier, according to a report by the Institute of International Finance.

If a Phase Two deal plays out as long as Phase One and goes beyond the 2020 election, a reelected and emboldened Trump presidency will not go easy for China. It is my take that President Trump will look at the first-quarter data from China, which is sure to have deteriorated from Q1 2019, and then wait until 2021 to pursue Phase One and really tighten the screws on China’s egregious behavior in so many areas. At that point, just maybe, the business of China’s “saving face” won’t amount to a hill of soybeans.

Join me for the Orlando MoneyShow, Feb. 6-8, 2020, at the Omni Orlando Resort at ChampionsGate. I will be speaking Thursday, Feb. 6, 10:30 a.m. about Double-Digit Income Investing. On Saturday, Feb. 8, I will talk at 8:00 a.m. about Extreme Profits Made Easy. Other investment experts who will be speaking include retirement specialist Bob Carlson, Wall Street investment powerhouse Hilary Kramer and world-traveling, free-market economist Mark Skousen, who leads the Forecasts & Strategies newsletter. Register by clicking here or call 1-800-970-4355 and mention my priority code of 049265.