It is often said that the bond market dictates to the Fed and not the other way around, making this past week’s commentary by Fed Chairman Jerome Powell simply an acknowledgement that the Fed will submit to the power of dramatically lower yields brought on by a massive rotation into U.S. Treasuries.

While the Fed did its own version of a “pivot” back in January, the bond market has put Mr. Powell and his colleagues at the U.S. central bank under rising pressure to cut the federal funds rate way sooner than the Fed had even considered. 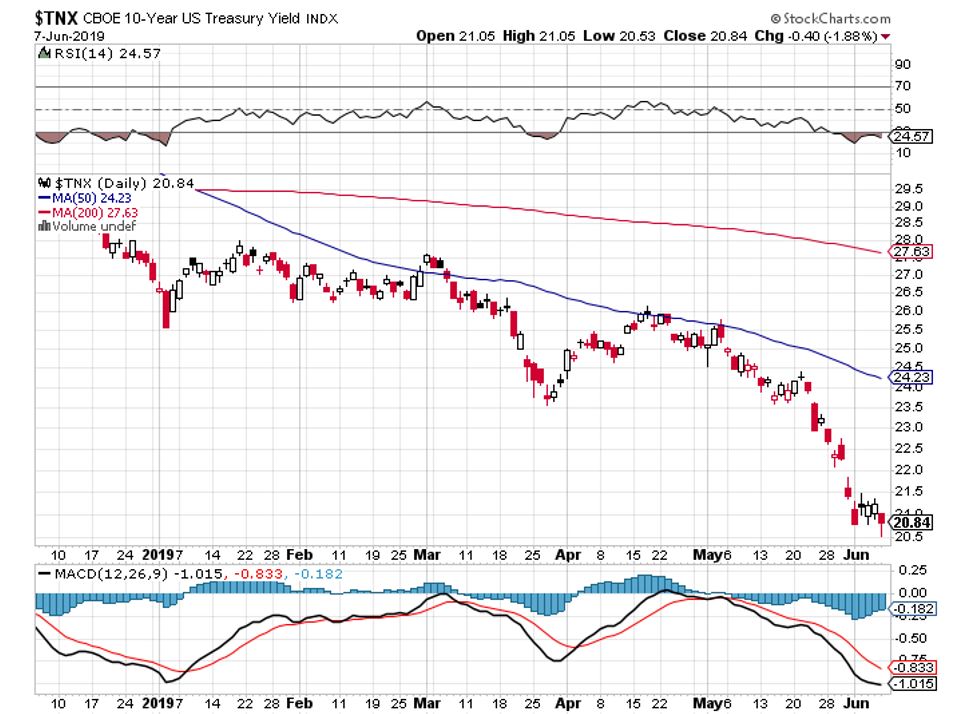 Once again, the Fed is playing catch-up with the current economic conditions. Soft data from the labor market all but put a lock on the prospects of a quarter-point cut at the upcoming July 31 Federal Open Market Committee (FOMC) meeting. The fed funds futures market currently signals an 85.6% implied likelihood of a rate cut at the July 30-31 FOMC meeting (Briefing.com). In just the past two weeks, the economic calendar has provided some clear hints of slower growth ahead with several reports coming in below forecasts. 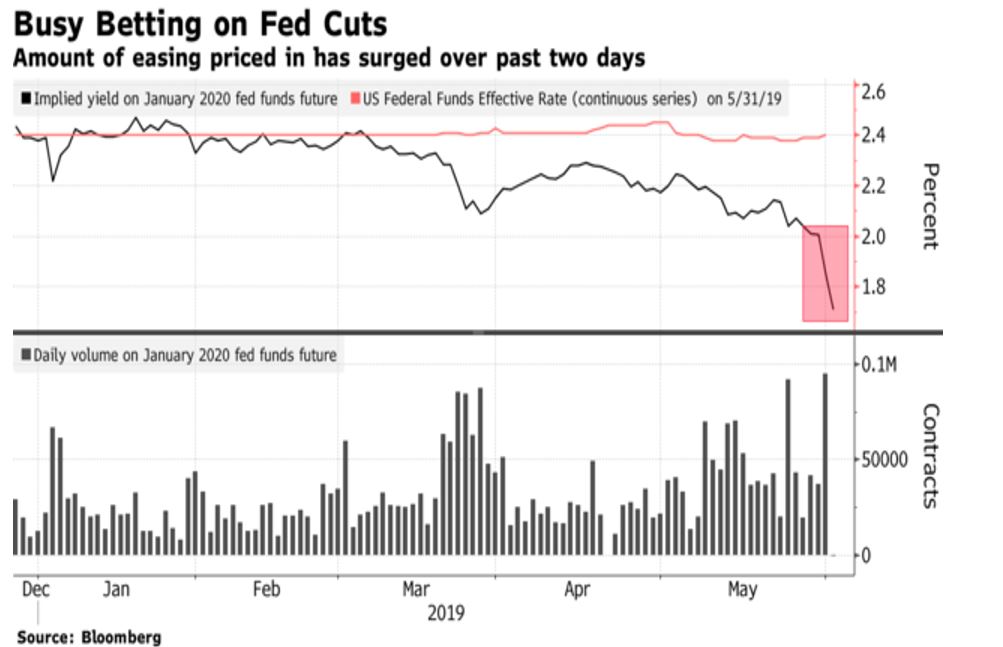 Stocks vaulted higher on the tacit promise of a rate cut by the Fed chief, with the S&P all but erasing the market losses from the prior three weeks that saw the S&P violate its 200-day moving average for two sessions. The four-day 150-point S&P rally from Tuesday to Friday was juiced by Powell’s statement about cutting rates, reports of a delay in the Mexican tariffs and crude oil getting bid higher following a protracted sell-off.

Currently, it looks like “happy days are here again” for stocks. Corporate spreads faced continued upward pressure due to persistent growth concerns and a sharp fall in the price of crude oil. 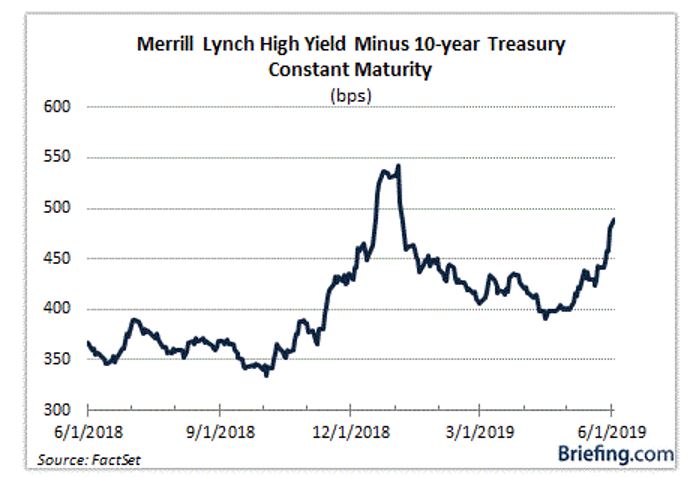 The high-yield market bears will be watching in the months ahead as the pricing of junk bonds historically has been a leading indicator for stocks. Credit analysts have growing concerns about growth prospects in China and Europe. But not all are worried, since junk bond issuers sold over $82 billion of paper from January through April of this year, representing an increase of 28% over the prior year period. So, for now anyways, it appears as if the junk bond and equity markets have survived another recession scare.

Below is a long-term chart of the iShares iBoxx $ High Yield Corporate Bond ETF (HYG), the most widely traded high-yield exchange-traded fund (ETF) that is worth a glance — given the mixed messages the market has been sending. Shares of HYG closed at $86.10 Friday. The low in December 2018 was $79.55 and the 52-week high was $87.04.

How this market will trade going forward under the assumption of a dovish Fed combating slower growth will be very interesting. Each sell off in HYG following the Great Recession has proven to be a buying opportunity in stocks. Indeed, the recent dip to $84.50 last Tuesday saw buyers step in with gusto. Until more is known about whether the soft jobs data is a one-off or something more concerning, I expect the junk bond market to remain in a fairly tight range, especially with the Fed set to accommodate markets.

What we do know is that stock markets operate on greed and investment-grade bond markets operate on fear. Junk bond markets actually operate more on greed than fear, per the appetite for yield. A better indicator of the health of the high-yield debt market is the direction of bid-offer spreads. While they are just one indicator of risk, junk bond managers closely follow the direction of bid-offer spreads as a measure of liquidity.

The gap stood at 0.96 cents per dollar last Wednesday, near the highest level since the low point of December. Pimco’s fund managers, who oversee $1.75 trillion in bonds, have stated that “it shows the cost to cash out of corporate bonds keeps getting bigger during sell-offs, when funds often face redemptions.” Pimco also indicated challenging liquidity conditions are here to stay as long as a trade war with China and political instability in Europe persist. 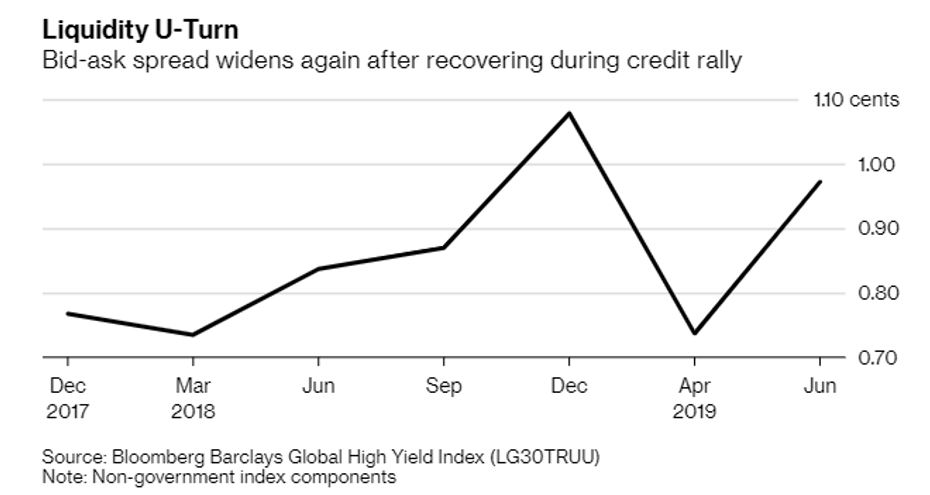 This is another way that investors can keep a pulse on a market that tends to have a high correlation with stocks. Like what we saw last week, both the junk bond market and the stock market can right themselves in a matter of a few days. Rapidly rising and falling liquidity is the “new normal” and we all just have to get used to it.