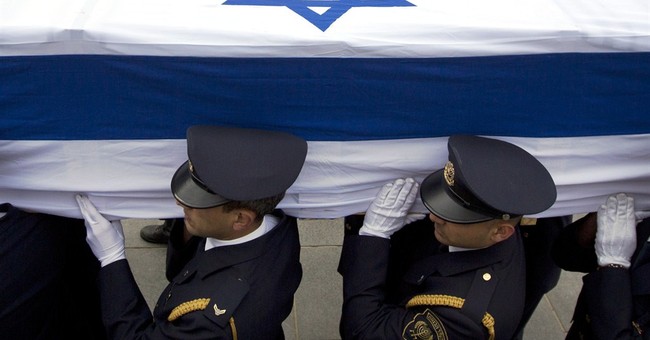 My wife and I had the enormous privilege of meeting Ariel Sharon in November 2004. I delivered a speech at the Jerusalem Summit II, and was invited by a member of the Knesset for a visit one evening while they were in session. We watched proceedings on the floor, and met a few of his colleagues. Shortly, he told me that the Prime Minister was supposed to be in the members' dining room and offered to introduce us.

Sure enough, Ariel Sharon was seated in a booth to one side of a remarkably modest cafeteria having a hamburger. My new friend introduced us and the Prime Minister immediately engaged us in a most pleasant conversation for several minutes.

Seated across the small room was Benjamin Netanyahu having a coffee and reviewing some documents alone. At the time he was serving as Minister of Finance and is, of course, the current Israeli Prime Minister. Netanyahu invited us to sit with him and quickly we were talking of mutual acquaintances in the U.S. and my particularly my home state of Colorado with which he was quite familiar.

Seventeen months later, Sharon suffered a debilitating stroke from which he never recovered. On Saturday, January 11 he finally moved on to his eternal resting place. In his half-century of military and political service to Israel, Sharon was both revered and reviled, but never did anyone doubt his total commitment to his nation or his people. He was indeed the stuff of which a true patriot is made. May he rest in peace.

Following is a tribute to Ariel Sharon as published by Powerline.com complete with numerous links to further tributes and accolades.

Posted by Scott Johnson in Israel, January 11, 2014 for Powerline

It’s hard to take the measure of a man like Ariel Sharon. As a warrior and as a statesman, he was a giant in Israel’s history. Commentary has posted Elliott Abrams’s brilliant assessment under the heading “Ariel Sharon: His eye was not dim.” It includes this eulogy that Abrams wrote for President Bush as they anticipated Sharon’s death at the time of Sharon’s stroke eight years ago: