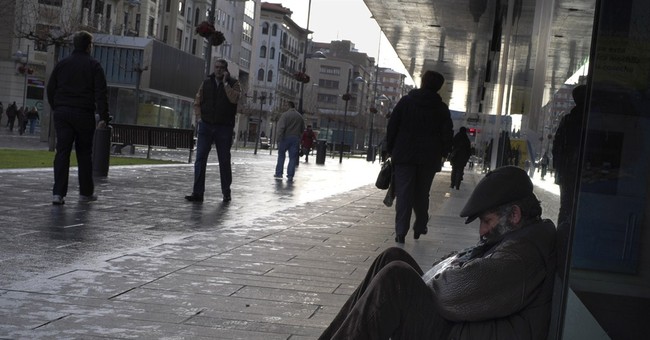 Trending
I started the following article before the horrible January jobs report from the Labor Department was released Friday, January 10. After several modestly encouraging months in a row, analysts were expecting the January report to reveal another month of steady – if not robust – new job numbers. News jobs averaged 214,000 for the last four months. But, Obama's Labor Department found only 74,000 new jobs were created in December – barely one-third of expectations.

There was more bad news; 347,000 people walked away, left the workforce entirely in a month when the total population increased by 178,000. The Labor Force Participation Rate (the measure of how many people have a job or are looking for one) fell back to just 62.8% matching a 35 year low.

Obama's current talking points about the economy call for 2014 to be "a year of action." What's he been doing the last five years?

After three successive tries at a "summer of recovery" that turned into another "winter of discontent," now the President says he is really going to get serious. Hopefully, he isn't planning more of the same kind of "action" that we've had for the last five years. That hasn't turned out so well.
CARTOONS |  Close to Home
View Cartoon

As for the recovery, "which is real," the President feels compelled to remind us, the following will provide a wealth of evidence that Obama's policies have resulted in an economic funk. Now in its 56th month, there are ominous signs that the end is still not in sight for Obama's non-recovering recovery, including the newest jobs report.

When compared to other post-recession eras the great American economy should have completed recovery and moved into an era of expansion long before now, as the data provided below indicates. That the President has to implore us to believe his recovery is "real" is a confession that it is far from obvious to anyone else, and anything but real.

Now, on to the rest of what I had originally planned to share about the tenuous nature of Obama's non-recovering recovery. I like pictures, charts, and graphs. Maybe I'm more of a visual guy than a verbal one, but they often tell a big story in a very tangible way for me.

The battle du jour on Capitol Hill is about extending long-term unemployment benefits, aka: Emergency Unemployment Compensation (EUC). This would be the twelfth time since 2008 soon after the recession began. Politicians have major anxiety attacks opposing such program extensions knowing they'll be branded as "heartless" in the upcoming election cycle.

Some Republicans are trying to find a "safe harbor" insisting the extended benefits – estimated at $6.4 billion – need to be "paid for" by spending reductions elsewhere in the budget. That should be child's play given the state of federal budget – but, don't hold your breath that it will actually happen.

As the saga plays out, it's instructive to put the current EUC program in context relative to previous "temporary" programs enacted during recessions. The following is from an October 30, 2013 statement by Rep. Dave Camp, Chairman of the House Ways and Means Committee:

The current EUC program already has served up about 10 times as many weeks of Federal extended benefits as the most recent program that operated in the wake of the 2001 recession and terror attacks, and nearly six times as many weeks as the program that ran from 1991 through 1994. That's just through July 2013, with tens of millions more weeks of checks to be added before the EUC program's expiration in December 2013. EUC's $252 billion in spending through July also dwarfs any prior program – already spending $200 billion more than any recent program, in inflation-adjusted dollars.

Comparing the Last Four Federal Temporary Unemployment Benefit Programs
*Through July 2013
Totals may not add due to rounding.

Perhaps not surprisingly, a new study identifies the EUC program as the cause of the painfully slow labor market recovery – as employers have withheld new job offers until after the Federal extended benefits program ends. Another study reinforces that such programs have been behind recent jobless recoveries.

Which leads to the big question that Obama and the Democrats cannot answer; Why is the economy still so very weak 4 ½ years into a supposed recovery?

Obama's economic policies have failed and the lack of trust and confidence in this Administration painfully prolonged prospects for a return to economic normalcy. For evidence we again turn to pictures.

One of the most damning indictments of Obama's policies is the following chart from a recentWashington Times feature story. Obama proudly announced from the Rose Garden that the recession had ended 55 months ago, "We've rescued our economy from catastrophe." If so, then why are there more Americans living in poverty today – about 50 million – than before the recession began.

The next series of charts are excerpts of an extensive feature published January 6, 2014 byInvestor's Business Daily (IBD) unless otherwise noted.

That this non-recovering recovery is by far the weakest of any in modern times. The graph below provides visual evidence. According to IBD, had Obama's recovery been "merely average, the economy would be $1.3 trillion – or 8% - bigger today than it is."

By this point of past recoveries there had been at least a 10% gain in new job growth. Despite Obama's oft-repeated claim that, "My number one priority is jobs," his near stagnant recovery has managed barely 4% growth in jobs, according to IBD.

The IBD editors go on to make the same case as we've made on these pages many times before including on November 20, 2013:

Worse, the total number of payroll jobs — 136.765 million as of November — remains 1.3 million below the level when the economy first went into the tank in December 2007. By comparison, our population has grown by 13 million over the same stretch. Statistically, this is the worst job slump since the Great Depression.

Instead of a return to full employment levels, millions of Americans have given up even finding a job and left the workforce entirely, as demonstrated yet again in the January jobs report. Obama & Co. like to point out that unemployment has fallen from a high of over 10% to the current 6.7%. But, the real story is how that number has been achieved.

As the following chart shows, the civilian labor force participation rate has fallen throughout this non-recovery recovery – currently at levels not seen since the Jimmy Carter year of 1978, except for October, 2013. As the following chart from a November 19, 2013 article by Ed Carsonalso in Investor's Business Daily indicates, when the millions that have left the labor force are taken into account, real unemployment is closer to 12%.

Which brings us full circle back to the current discussion in Washington about various transfer payment assistance programs. Not only have unemployment benefits during this recession greatly exceeded other recovery periods in duration as well as in total spending, but the same is true for the other two major assistance programs, food stamps and Social Security Disability Insurance. The following chart demonstrates the explosive growth in both programs – neither of which has reversed the trend line as yet in this recovery – juxtaposed to the rather anemic growth in total employment.

After five years, excuses won't cut it. Obama can't say it is still George W. Bush's fault or get away with blaming it on a hurricane or a polar vortex. Nor, can the two combatant factions on Capitol Hill point across the aisle and blame the other guy. America deserves and needs better than that.

Eleven months ago I published my Six Principles that should guide Congress and the White House in a legitimate attempt to get the nation's fiscal house in order and provide some desperately needed confidence back into the private sector economy. The bullet points are repeated below, the full narrative can be found here.

This list is by no means meant to be all encompassing; more of a good point of beginning that politicians should be able to embrace that would have immediate as well as long term positive economic benefit. All six principles might seem obvious to most, but every single one has been maliciously violated over the last five years, and in too many cased, for longer than that.

Barack Obama was first elected on a very American belief that "Yes we can." Now would indeed be a good time to restore that sense of confidence; the American Swagger. Unfortunately, Obama's "year of action" is off to another disappointing start.