Obama Economy Improving....Compared to what? 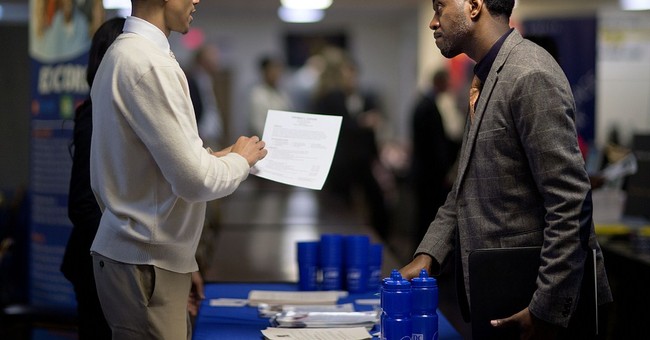 The November jobs report released last Friday by the Labor Department seemed a breath of holiday good cheer at just the right time. The White House (in desperate need of anything that resembled "good news") hailed the report as evidence that "the recovery continues to gain traction."

"Has the job market finally hit its stride?" was the rhetorical question that CNN used to lead their coverage of the new numbers. "Hiring continued at a solid pace in November, and the unemployment ratefell to a five-year low…for the right reasons," CNN cheered.

The unemployment rate came in at 7.0 percent and job creation exceeded modest expectations with growth across most sectors. What's not to like?

A more careful read of the Labor Department's report, however, explains that the numbers and ratios were heavily impacted by "the return to work of federal employees who were furloughed in October due to the partial government shutdown."

Further, the number of long-term unemployed (27 weeks or more) that has been particularly worrisome during the stubbornly sluggish recovery "was essentially unchanged at 4.1 million in November" and accounted for 37.3 percent of the total number of unemployed, according to the Labor Department.

The Obama Recovery supposedly started in June 2009 – fifty-three months ago – making this by far the slowest and weakest recovery in the modern era. Like most Americans, we've been looking for that time when we turn the corner, too.

But, before the White House and Obama's cheerleaders can claim a legitimate victory over the recession, the economy still needs to return to something close to "normal." Utilizing the Labor Department data, some simple calculations demonstrate that Obama's "New Normal" – as the Washington Central Planners like to call it – is still a far cry from the economy that existed prior to the recession.

The following chart helps do a comparative analysis utilizing key indicators from the Labor Department's statistics.

Three dates are used for reference:

November, 2007 – the month employment peaked prior to the recession. Net monthly job loss continued until January 2010.

Most of the above data is directly from the Bureau of Labor Statistics including the total population, civilian labor force, participation rate, total employed, unemployed, and unemployment rate. Following is a brief explanation of the other calculations:

The Adjusted Labor Force estimates the size of the workforce if the economy were functioning at "normal" conditions. The labor force population for the corresponding date is multiplied by a participation rate of 66.53 percent. (66.53 is the average LPR from January 1990 through December 2008.)

The Labor Force Shortfall is the difference between the Labor Department's reported size of the workforce and the Adjusted Labor Force calculation.

Jobs Deficit is the difference between the stated BLS employment total and the adjusted labor force less the unemployment level for a well-functioning, health economy (we used the CBO's 5.4% baseline).

The adjusted calculations provide an apples-to-apples comparison and reveal a far less flattering reality than the government's simplistic unemployment rate that gets the vast majority of media attention.

Specifically, when the recession began in late 2007 the economy had been humming at a robust clip. Unemployment was low and the LPR was very near the historic average. Thus, the "jobs deficit" was minimal (10,000).

By the time Obama took office, the LPR had declined slightly (65.7 percent) and unemployment had soared with more than 15 million out of work. The "jobs deficit" hole that Obama inherited was nearly 5.6 million as indicated.

But, over the last five years of minimal job creation, millions of Americans have abandoned all hope of finding a job and the labor force has continued to shrink. The percentage of people in the great America workforce is the smallest since 1978 during the horrific Jimmy Carter "stagflation" era. Additionally, nearly 11 million Americans are still on the unemployment rolls.

Bottom-line, contrary to the happy face the White House and media Obamaphiles put on the recent economic report, times are still pretty tough. A more accurate unemployment rate that accounts for the frustrated millions that have given up even trying to find work is close to 12 percent.

Further, a recovery to a normal, healthy, robust economy is still 10.8 million jobs away – nearly twice the jobs deficit when Obama took office almost five years ago. Instead of replacing all the jobs lost in the recession and expanding employment – the very definition of an economic recovery – the jobs deficit continues to grow during Obama's presidency as millions leave the workforce and new job creation barely keeps pace with population growth. Even if new job creation rates were to double, it would take about 40 months to recover from the jobs deficit hole created over the last five years.

"We've rescued our economy from catastrophe," Obama said in a Rose Garden ceremony announcing the end of the recession in the summer of 2009. A year later, with the economy still struggling after his $800 Stimulus was supposed to have fixed it, the White House announced 2010 would be "The Summer of Recovery". But, that didn't materialize either.

Three more opportunities for a Recovery Summer – or Spring, or Fall, or Winter – have come and gone since then without anything resembling a return to a healthy economy happening. Instead of economic policies that instilled confidence and optimism into the market place, the Administration accumulated deficits double and triple anything in history, strong-armed passage of the anti-jobs, tax increasing, punitive ObamaCare legislation, took a giant step toward nationalizing banks with Dodd-Frank, and promulgated constricting, costly regulations by the tens of thousands of pages. All of which were job-killing, not job creating actions.

Instead of rescuing our economy from catastrophe and leading a recovery as he promised, the pain continues. Instead of a real recovery, we are told this is the "New Normal" – to expect less – to put our dreams on a diet.

The President demonizes the successful and attacks capitalism and prosperity as evil. Taking from those who made it and giving to those who did not – spreading the wealth, or income equality…it's the same thing – he says is "the defining challenge of our time." He cuts a nuclear deal with the "death to America" Iranians, and extends his hand to Raul Castro, the most anti-American Communist in the hemisphere.

And, that's only a partial list of the "confidence building agenda" of Barack Obama. It is a credit to the resilience of the American people and this economy that we're not in even worse shape. It certainly isn't because of leadership from The One.